Congratulations to the writers who finished their stories and sent them in as part of the Write for a Reason Challenge earlier this year! “The end of a thing is better than its beginning” (Ecclesiastes 7:8 – also proved because I finished my curtains – I promised you a picture, and here it is!) 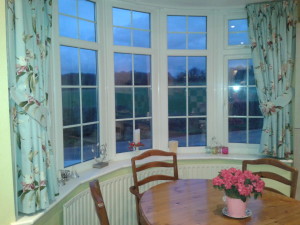 It was humbling to receive the entries to the Challenge, and hear how the children who read them enjoyed your stories.

Every story has the potential to touch lives, and every child is precious.

For those of you who missed it, the Write for a Reason Challenge was to write a short story (3-5,000 words) for a specific child of your choice, on the theme of new beginnings. The challenge wasn’t just to write the story, but to give it to your chosen child to read. Writers had about ten weeks to write their story, get the children to review it, and send both the story and the review to me.

One of our Write for a Reason course students, Catrina, decided to take up the challenge and write a story for her daughters. Catrina told me that her eldest daughter had tears in her eyes when she read it.

And here, here to inspire you, is an excerpt from ‘Wings for Christmas‘ by Catrina Sullivan:

“Of all the toys in Jalila’s toy box, her favourite were her wings. She wore her toy wings when ever she could, in the playground when she played with her friends. In the kitchen when she helped mummy bake cupcakes. She even wore them when she went shopping in the west end with mummy and daddy. Each night when Jalila got ready to go to sleep, she hung her wings off the end of her bed. She didn’t wear her wings to bed just in case they broke.

It was a couple of weeks before Christmas, Jalila was playing with her toys in her bedroom, and just like any other day, she wore her favourite wings. She prepared a tea party for Coco the monkey, Ted the bear, and Apple the horse. She invited all the princess dolls from all the kingdoms near and far to the party. Jalila spent a long time preparing for the party, she used her best pink tea set, the matching knives, forks and spoons, placing them neatly on the table with the pretty pink table napkins; just like how mummy sets the table in the dining room. Jalila prepared all the food in her own little kitchen, eggs and beans which were really mini kinder eggs and jelly beans, and mummy prepared Jalila’s favourite jam sandwiches and chocolate milk. Jalila carefully placed all the party food on plates and as she walked from her little kitchen across her bedroom to her beautifully set table, she suddenly tripped over one of her roller skates and hurt her knee. Jalila ran crying to her mummy. She didn’t cry about her knee, even though it did hurt quiet a lot. She cried because she broke one of her wings.”

You’ve probably noticed that it’s not perfect, but there’s nothing an editor can not deal with, and Catrina did it! She started, she finished.

You could do it too! If we do the Challenge again in the summer, would you like to join in? Let me know in the comments below – and if you have any ideas for a theme, do share!

P.S. If your story wasn’t featured, don’t worry, it may yet appear!

P.P.S. Have you ever suffered from writer’s block? This is the subject for our Monthly Membership Programme – final call if you would like to join us!