Today’s creative writing tip is all about personification.

Personification is the attribution of human characteristics to something non-human. That could be an animal, or something non-living.

First, let’s take a look at personification of animals (also called anthropomorphism). We might like to include animals in our stories who think, talk, feel human emotions, have a conscience, unite for the common good, fight evil, or who have other human traits and temperaments.

Your world might be populated with creatures we recognise, such as bears or rabbits (e.g. Rupert Bear, Peter Rabbit), or fantastical creatures we create ourselves (e.g. the dragons in How to Train Your Dragon). Both are great! You can, of course, mix them up, as C.S. Lewis did in his Narnia stories – the children were human, but there were beasts aplenty. Some you would recognise: some you wouldn’t. Aslan was very much a lion, but fauns like Mr Tumnus do not exist in real life. And of course, the White Witch wasn’t quite human…

Your imagination is the limit, and stories including human-style animals can be great fun. Which is what fiction is all about, after all. Could you add some exciting animals to help the humans in your story? Or some humans to help your creatures? Kids love anything with loads of imagination! 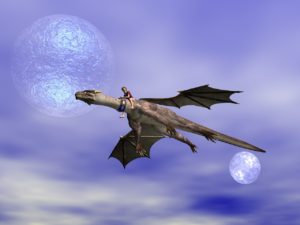 Now let’s take a look at personification of non-living things. Here’s an example from London’s Gone:

Being busy had prevented Maria from considering the enormity of what they were about to do, but as she sat alone on her bike in the drive, waiting for Emily to get some last forgotten item, it hit her hard. Shadows were already beginning to lengthen across the driveway and a deep foreboding filled her. The tall trees and the wind seemed to be whispering together, plotting their malicious intentions high above, where she couldn’t hear what they were saying. The evening chill seemed to be joining in the evil game, too; it was still only afternoon, but it was already stretching out its cold tentacles. Maria shivered and looked round in rising alarm at the creeping shadows, feeling small, alone and afraid. “Come on Emily,” she muttered under her breath. It was the first time she could ever remember wanting to see her sister! Then she caught hold of herself and sat up straight. “You can’t touch us!” Maria announced boldly to the sinister silence. “Granny and Grandpa are praying for us.” At once she felt a peace that was almost tangible. It was like nothing she had ever felt before – like everything was going to be OK, like there was something, someone even, who was out there, taking care of them. Maria looked round, so strong was the feeling, but there was nothing to be seen. She laughed at herself for talking to nothing and checked that Emily had not seen her.

We all know that trees aren’t really whispering and plotting, and the chill of evening isn’t playing an evil game, but if you get this right, you can make a big difference to your novel by using this technique.

I think I may have said something like this in a previous post, but, hey, repetition is sometimed a good thing! 🙂 Could you use this technique in your story?

Trust this has been helpful – if it has, would you share it with a friend? Thank you!

P.S. If you don’t already subscribe to receive creative writing tips direct to your inbox, you can do so here.