Occasionally you will come across a story for young people where you think a glossary of some sort would have been be helpful. I remember one book I used to read over and over as a child, where most of the action was set in India. The word “sweetmeat” was used, and I had no idea if it meant something “sweet” or something “meat”! (I wish I could remember the name of that book, I’d love to read it again!)

In a glossary, specialised vocabulary can be explained, but away from the text, which means it doesn’t slow the actual story down. You don’t have to dumb the language down though, which is great for readers. 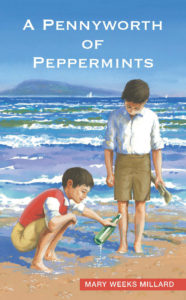 One of our Dernier Publishing books, A Pennyworth of Peppermints, is set in Dorset in the First World War. The author has added a glossary. Zeppelins, farthings, regiments and anything else young readers might not understand are all there.

I have just read a book for younger children (7+) set in the Wild West 150 years ago, and was pleased to find a glossary at the back. There are only nine entries, but every one explains a word that today’s seven-year-olds may not be familiar with, such as “pioneer” and “tinderbox”. And did you know a jackrabbit is a long-eared American hare? You see how useful a glossary can be!

You could also use a glossary if your story is set in the future and you have words or ideas that need an explanation; or if your novel uses scientific terms, latin names, or foreign words.

Could your story use a glossary? It’s a great way to stretch your readers’ vocabulary and add interest, too. 🙂

Let me know what you think of the idea of using a glossary. Always love to hear from you. 🙂

P.S. I need a few guinea pigs to trial a new membership programme. Would you like to take part? More info here.